Hurricane Hydroponics designed its 3-part vegetative growth concentrate system for all types of hydroponic systems. Nutrients contained in Tropical Storm are made from pharmaceutical grade components to ensure consistency and reliability.

Use of the Tropical Storm 3-part system provides growers with a stable fertilizer base consisting of all essential minerals needed by the plant to encourage aggressive root development and achieve targeted growth responses capable of optimizing photosynthetic, amino acid/protein synthesis and metabolic processes to support future developmental and defense processes.

For our vegetative growth program, we developed concentrates that establish nutrient solutions with N-P-K ratios that are high in nitrogen (N) and lower in phosphorus (P) and potassium (K) in early phases of vegetative growth.

Phosphorus is a component of the complex nucleic acid structure of plants, which regulates protein synthesis. Phosphorus is important in cell division and development of new tissue. Phosphorus is also associated with complex energy transformations in the plant.

Hurricane Hydroponics Tropical Storm system will satisfy the requirements for the production of good stem and leaf structure that are essential for the development of healthy plants and precondition the plants for optimal flower production.

Potassium is an essential nutrient for plant growth. Potassium is associated with movement of water, nutrients, and carbohydrates in plant tissue. 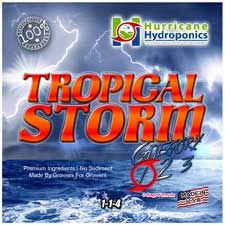 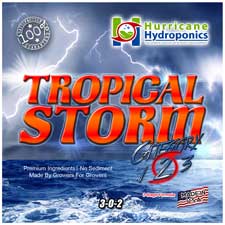 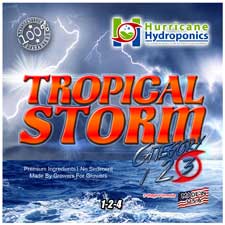 HYDROPONIC/SOILLESS MIXES USE: Use directions can be found on the Tropical Storm labels and Feeding Charts below:

Although Calcium (Ca), Magnesium and Sulfur are considered secondary elements, their importance to successful crop production is equally important as N, P and K.

Calcium is needed for plant growth, participating in cell wall formation and cell division. It is used by the plants to maintain healthy roots, ensures the proper translocation of nutrients and carbohydrates within the plant, and activates a number of plant growth-regulating enzyme systems.

Magnesium is directly tied to the energy status in plants. It is an essential constituent of the chlorophyll molecule. It also essential for phosphate availability and metabolism as well as cell division and protein formation. It is also linked to plant respiration and the activation of several enzymes systems.

Your hydroponic or horticultural container crop nutrient system is only as good as its weakest link. The weak link in fertility programs is often overlooked — sulfur (S).

Plants often require as much sulfur as phosphorus. Sulfur is included within the Tropical Storm vegetative growth system because it plays a wide variety of vital roles vegetative stages of plant development.

Sulfur is a molecular building block in a number of amino acids, metabolites, proteins, hormones and vitamins and serves as a catalyst in chlorophyll production. Synthesis of two key amino acids directly linked to relief of stress in plants require sulfur.

Don’t let sulfur be the missing link in your nutrient system.

Micronutrients such as Iron (Fe), Zinc (Zn), Copper (Cu), Molybdenum (Mo); and Boron are included in the Tropical Storm formulations but only in trace amounts. Where required our micronutrients are chelated using amino acids to improve their movement into and throughout the plant. These elements effect growth, reproduction, and the effect that other nutrients have on the plant.

Enhanced sugar (carbohydrate) production during the critical vegetative stage of development can be expected from Tropical Storm based nutrient solutions.  Plants will use this improved carbohydrate status as a source of amino acid and protein synthesis.

Increased structural and non-structural carbohydrate resources will allow for the plant to meet metabolic requirements and undertake robust vegetative growth as well as be supplied with energy reserves for future use.

The Tropical Storm feeding program provides the nutrient mix that will strengthen the natural defense responses of the plant.

The basic component of living cells in plants is proteins. Amino acids are the building blocks for the synthesis of structural and enzymatic proteins necessary for plant growth, reproduction and general metabolic function.

AminoN  has been included within the Tropical Storm system to provide a rapid source of the full complement of L-amino acids required by the plant to generate proteins, pigments, nucleotides, enzyme cofactors, hormones, structural components and defensive agents.

These fully assembled L-amino acid protein precursors lower energy requirements by the plant during the vegetative stage by bypassing high energy requirements needed for synthesis of similar amino acids by scratch (de novo synthesis). In addition to the immediate use of pre-assembled amino acids provided in the Tropical Storm formulations, plants are also fully capable of breaking down AminoN L-amino acids and re-assembling the parts to match site specific amino acid configurations — effectively and efficiently remobilizing nitrogen and other elements to suit the specific needs of the plant during different stages of growth and reproduction.

We at Hurricane Hydroponics respect the needs of growers to have the ability to modify their nutrient solutions during the vegetative stages of plant growth and development.

The Tropical Storm system is fully customizable, ensuring satisfaction of nutrient requirements from early formative phases of plant development to vegetative maturation. The composition and concentration of the nutrient solution can be easily adjusted to align with your growing system, your crop’s development stage and environmental conditions.

The Tropical Storm system is not to be used beyond the vegetative phase of crop development.