White Squall is a highly active, multi-functional and multi-site oxidizing water treatment for use in water culture based hydroponic systems. White Squall is effective when used as either a preventative or treatment application to remove mineral deposits (descale), algae and bacterial biofilms that can develop in hydroponic nutrient reservoirs. It is also highly effective in creating an aqueous environment that is unfavorable for the development of microorganisms such as bacteria, fungi, viruses and other pathogens.

White Squall’s principle constituent is hypochlorous acid (HOCl), an oxyacid of chlorine that acts as a weak acid but demonstrates powerful oxidizing properties. It is the oxidizing property of White Squall that contributes to its highly effective descaling of mineral deposits and destruction of bacterial biofilms.

Hypochlorous acid is also acknowledged to be among the most potent disinfectants (sanitizing agents), yet it remains non-toxic to humans and other mammals. In fact, hypochlorous acid is produced by the human body’s immune cells to fight infections.

White Squall’s safety extends to plants and can be used at any stage of plant growth. It can also be used as a final flush to help reduce residual mineral build-up. White Squall should be used in a pH controlled environment. Its hypochlorous acid constituent will exist as the dominant chlorine species under pH conditions ranging from 2.0 to 7.0. Maintaining the water pH at this range provides the greatest performance.

Use of White Squall for Descaling

Hypochlorous acid reacts with both calcium carbonate and magnesium carbonate resulting in chloride salts being formed (CaCl2 and MgCl2) that are highly soluble in water. These soluble salts can then be removed from the system quite easily.

In addition, the oxidative property of White Squall will cleave and make available for removal, structures of biofilms and organic matter in nutrient solution tanks that may serve as nucleation attachment sites for calcium carbonate and magnesium carbonate. Remnants of biofilms and organic matter can be washed away leaving surfaces clean. This action serves as a means of inhibiting scale formation. 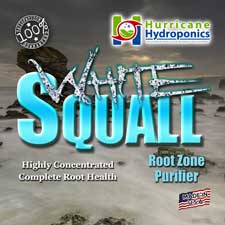 White Squall is a multipurpose highly concentrated root zone purifier, that descales and removes potentially harmful biofilms in nutrient reservoirs. By reducing the habitat of plant pathogens White Squall is proven to aid in root development and purification.

Use of White Squall to Dissolve Biofilms

Bacteria normally have two life forms during growth and proliferation. Bacterial can exist as independent cells (planktonic) and in this form are recognized for their ability to produce infections. Bacterial will also take on another form where they organize into sessile aggregates and are referred to as a biofilm growth. An established biofilm structure is comprised of microbial cells enclosed in an extracellular polymeric (normally a polysaccharide material) matrix.

Matrix protein production is commonly coordinated with the production of other matrix components, such as exopolysaccharides, leading to optimal biofilm structure and function.

This assemblage of microbes in their protective polymer blankets provide an optimal environment for proliferation and exchange of genetic material between cells.

The control of biofilm within water systems is essential.

White Squall offers a powerful multi-site solution for the degradation and removal of biofilms in hydroponic systems.

Polysaccharides contain a large number of compounds that contain hydroxyl groups (OH) on two or more adjacent carbon atoms. These are target sites for HOCl. HOCl substitutes chlorine (Cl) for a hydrogen proton (H+) and cleaves (opens) the adjacent carbon bond (often called “oxidative scission” or “deprotonation”). This process continues (as long as there is a sufficient concentration of HOCl in the water) at terminal and internal sites until the polymer matrix is dissolved.

Once the biofilm structure is breached and destroyed, bacteria and other harbored microbes are exposed to the elevated Oxidation-Reduction Potential (ORP) levels in the water environment created by White Squall. Water with high ORP levels have been documented as highly unsuitable for microbial development as compared to water that is untreated.

The multifunctional oxidizing properties of White Squall directly benefit the plant’s rootzone. There is no risk of root burn.

Growers should observe plant roots that are whiter and generally are larger in mass than those grown untreated. Roots are also less susceptible to root diseases such as root rot. As a result of a more favorable root zone, plants grow in an environment that encourages enhanced growth and vigor.